It’s A Troubadour’s Life For Me…

It’s A Troubadour’s Life For Me

When it came time to embark upon my most ambitious three months of touring to date; I had no idea how exciting, painful and joyous it was about to be…

However, I wouldn’t have changed it for anything and this piece might go some way to explaining why.

I had decided to tour Europe (France, Germany and The Netherlands) with my good friend Joel Gardner. He’s a very talented and hard-working, fingerstyle guitarist from Manchester with an absolute dedication to writing pop-rock songs that make you sit up in your chair. He’s also partial to a soothing ballad.

The two of us spent 6 months emailing hundreds of venues in mainland Europe and eventually, we had 18 or so dates in the calendar. We named the tour ‘The Grand Tour’; undeterred by the confusion it undoubtedly caused with a certain TV series produced by Amazon. I received a lot of new Instagram follows from car fanatics!…Secretly, our favourite tour name was: ‘Before We Brexit’. But we thought better of it.

With barely anything but our two guitars, and a photographer from Barnsley called Brendan, we jetted off to the mainland for three weeks of manic driving, sleep-deprivation and excellent gigs.We played in a scrapyard in Munich, an upcycled record shop in Dortmund, a living room in Zweibrücken, a castle in Dresden and a hostel in Amsterdam.

It was no picnic…We got lost, lost our stuff and almost crashed the car. We played a couple of bad gigs, Joel had his equipment stolen, we got locked out of our accommodation and the punishing schedule we’d set months ago had us cursing our former selves.

However, what got us through it all, was the people we met. I have never felt so encouraged to continue on the musical path that I am on. Germans seems to foster unsigned musical talent like there is an international shortage! We were spoiled with riders, merchandise sales and the audiences turned up in droves to see a couple of UK troubadours that they’d never even heard of.I don’t think I’ll ever forget some of the wonderful, charitable people. One guy in Leipzig, known only to us as Mike, threw in 50 euros after our set.

We shot a tourist film with a Colombian vlogger, slept in a beat up caravan, got very drunk with a Polish girl in Speyer and we saw enough incredible castles and vistas to fill a lifetime. The latter greatly pleased our tour photographer Brendan! That Europe tour was without a doubt, the best three weeks of my year. It was an adventure, in the truest sense of the word.

Joel documented the whole tour in a series of daily blog posts. One of his crowning achievements is the blog that details the morning after our brutal, over-night drive to Paris. It’s a hilarious account of our brilliant day in Paris and concludes with some special thanks to everyone we met. You can read that blog here at this link – read more.

After Europe, I did not have long before the biggest UK tour that I’ve ever done. These were ticketed shows in venues we’d hired, to crowds we hoped would be there…

It has been my distinct pleasure and privilege to get to know the singer-songwriter that I was to perform my next tour with. I met Gavin Osborn in Liverpool in February 2018, we were both already big fans of each other’s music.Five months later we were in Leamington Spa taking promotional photographs for our upcoming joint UK tour. Shoving jam scones into our mouths while balancing precariously on a noddy car pedalo. It has to be said, we had arrived with very few concrete ideas…

Eventually, we came up with the name: ‘A Little OTT’ (A Little Osborn & Tavener Time). This would be an evening of folk, blues, stories and many laughs as Gavin and I played through our individual back catalogues of songs.Gavin is a brilliant writer! His natural, witty charisma is present in every lyric and his softer songs touch on the most profound life experiences, in a hilarious and satisfying way.He’s even got a song about Adam Woodyatt from EastEnders…With a history of nearly twenty years in live music, he’s performed and met with everyone worth knowing on the folk circuit and beyond.Every car journey with Gavin was a treat. We shared gig stories, favourite artists and musical ideas. Never once did he turn up for ‘work’ in a bad mood.

We jammed with harmonica-playing audience members in Liverpool, drank until the early hours in Hull and got lost in Glastonbury. Figuratively speaking of course – we got lost in the music. And I also got physically lost…We pleaded with music shops for last minute gig gear in Cambridge; tried to promote our gig to afternoon drinkers in Edinburgh and my overnight stay in a hostel next door to a nightclub in Bristol was one of the worst nights sleep of my life.

We made sure to have a good old, lengthy chat with the only 6 people that turned up in Newcastle and the only 8 that turned up in Cambridge.But every single show made the journey worthwhile and I have never played to so many people in so many cities in such a short space of time. Playing to a full house in London’s notorious Bill Murray Comedy Pub was a highlight, as well as playing to my friends and family up in Chester and Manchester. 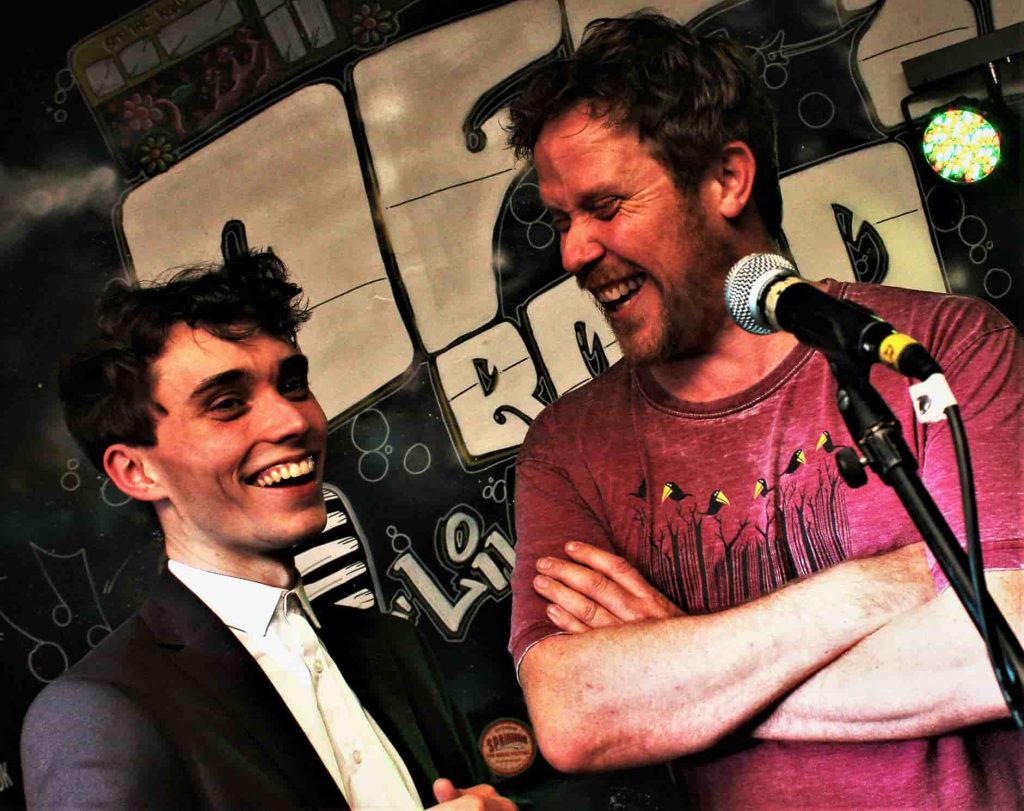 The ‘A Little OTT’ tour ended in Southampton on 10th November 2018. I collapsed into my Travelodge bed in the A34 service station, 160 miles from home.

Not a single piece of this whole touring experience is unusual to any musician desperately trying to make their way in the world of music. I feel very proud and lucky to be one of those able to perform these tours in far off places, meeting new faces and having the time of my life doing what I love.

I’m still considering my next move and planning another opportunity to share music with anyone willing to listen. It won’t be too long before I get the itch to travel again.I hope that I might see you there.

All photos credit to Brendan Clayton Photography. Except ‘Off The Road Lounge, Hull – 19th October 2018’, credit goes to Christopher McNally.