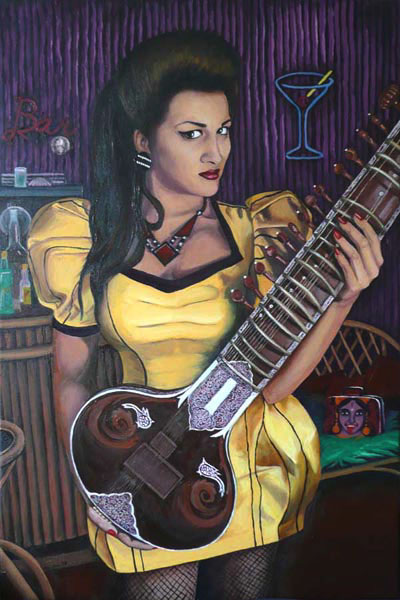 From the perspective of an independent musician, the music industry, is much like a feudal system of the 1 per cent (those who have been signed) and the 99 per cent (the independent sector),” explains multi-instrumentalist Bishi. She goes on to say how the digital sphere has enabled musicians to create music on their own terms. And although the administration involved in actually releasing or selling the music is where independent musicians fall short, “Independent musicians are utilising technology to channel their vision for music and passion for people to manifest ambitious projects,” says Bishi. “In 2019, we will see the rise of the musical artist as entrepreneur.”

The fast-paced nature of technological development has brought with it new and empowering avenues for musicians to break away from traditional industry practices, and find their own path in the global music scene. Using technology to increase a fan base and generate more revenue is not new to music. Musicians and producers have been tying their careers to movies, games, and merchandise for decades, a practice that continues to be effective today. Kurt Cobain: Montage of Heck and What Happened, Miss Simone? are just two of the many movies that tackle the lives and works of some of the most iconic musicians of the last century. On the web, digital giant Slingo has several official tie-ins to both current and past musicians including games based on Guns n Roses, Jimi Hendrix, and Kiss. The same bands continue to sell merchandise in the form of console video games, clothing, and even equipment. The problem with these tried-and-tested methods is that while they’ve become perfect avenues for promotion for the biggest names in music, the sub-industries surrounding these promotions have left independent musicians in the dust. Yet at the same time, they’re prime examples of how digital content is vital to innovation in the music industry. This year, there are plenty of emerging digital innovations that are geared more towards helping fledgling, talented artists dig their way out of obscurity, or even just gain enough compensation to make music their primary careers.

It doesn’t take a genius to see that even today, it’s a challenge for the music industry “To ensure (that) all involved are paid and acknowledged fully.”. This is one of the missions listed by Mycelia, a growing digital community that uses blockchain to encrypt indelible signatures into new musical works, theoretically allowing everyone involved in the production to be paid their dues. This is ultimately aimed at creating what they describe as a “vibrant music industry ecosystem” that can unlock the huge potential of any and all music creators and producers. Wired reveals that the brains behind Mycelia is Grammy-award winning electronic singer Imogen Heap, who believes that blockchain-based technology is the key not just to fair compensation in the music industry, but also towards opening new and creative doors for experimental production. Should Mycelia take off, notoriously underpaid independent musicians are one of the groups that can truly benefit from its fair-share features.

Meanwhile, a similar and potentially more ambitious initiative could soon rise in the form of KORD, a developing blockchain-based, global network for intellectual property rights. It’s being developed by London tech startup JAAK, who The Music Network reveals is already in the process of making deals with notable labels like BMG, Phoenix Music International Ltd, Warner Music Group, Outdustry, Sentric, in the hopes of fairly addressing the complex task of allocating royalties in the digital age. The goal is to create a decentralised database of music rights, including the application of smart contracts, licensing capabilities on a global scale and perspective, industry-wide collaboration on rights, and other benefits that can streamline processes and balance benefits in the music industry through blockchain transactions.

Despite the technological advances, we’re likely to see the same formats and industry methods still thrive in 2019, particularly in the form of burgeoning indie events like Congleton Unplugged, and giant streaming services like iTunes and Spotify. However, it’s easy to see how even these well-established methods of releasing music will inevitably be changed by blockchain and other digital technologies that can put the power back in the hands of creators. Streaming, royalties, events, records, collaborations, merchandise, and more – there’s virtually no limit to what this new tech can do for independent music in 2019.